In the Northeast, it’s been cold for sometime now with some of us having major snow falls of 14+ inches this winter. So let’s imagine that it’s 6am and you’re dispatched as First Due Engine to a structure fire. The wind chill is down around 10 degrees with a strong wind. Your company pulls up to find this: 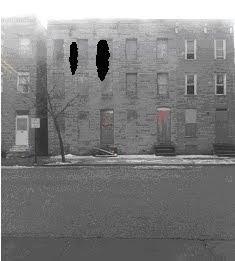 What to do? As you can see, the structure appears to be vacant, as do the structures on either side. Do you lead off to a water supply only to put blitz lines in service and see how much water weightthe floors of this dwelling can withstand before they collapse?

Let’s say that you are ordered to take this route per your company/commanding officer. The crew quickly knocks the bulk of the fire when a homeless man comes running from the corner and tells you that his “friend” was staying in that house last night, and he had not seen her leave this morning. While you’re waiting for fire investigators to arrive you realize that the cause of the fire may have been the woman’s source of warmth? Maybe it was a candle or a kerosene heater? Did she use the proper fuel? Or perhaps she was burning paper in a coffee can? Did she remember to put the can out before she drifted off to sleep?

After their arrival the Fire Investigation unit quickly locates the remains of a female on the 2nd floor. Is someone to blame for her death? Or is it just an act of a higher power taking someone at his or her time? Thinking back, could this fire have been contained with your standard 1 3/4’’ hose line?

From the looks of this picture, it appears to have been one room and was quite possibly only a vacant. Some people in the fire service would have viewed this as a tragic, unavoidable situation. But is it? How difficult would it have been to investigate the structure upon arrival? Did it appear to be sound? How far had the fire advanced? Could the hose team have made a quick aggressive knock on the fire using a handline?

It’s quite possible that no one will ever know because the actions may have just killed a innocent, homeless woman. Think about it. We are sworn to protect lives and property. What if the knock on this fire wasn’t quick, and it started walking down the block? Now it’s below freezing, a woman has perished, and houses in this group, that may have been occupied, are now in danger of burning because the company was playing it safe, based on the decision of an officer-in-charge who did not want to make an aggressive command decision.

No one is suggesting that you need to push in to a fully-involved vacant dwelling and placing your firefighters at risk. But 15 minutes of hard, fast, aggressive work…that’s all it takes to save a life.

Or on the other hand, let’s say that the woman left earlier that morning, leaving via the back door. Would the crew have accomplished anything by still pushing in and making the interior attack? YES! For the overall firefight to be effective, firefighters need to stop this fire – any fire — before it extends to the other buildings (HOMES!) in the group.

It is important to note, that NO structure is vacant until A PROPER SEARCH IS INITIATED, followed by the crew’s report, “SECONDARY SEARCH NEGATIVE.” This leads us into our next topic. SEARCHING DWELLINGS. This is the fundamental reason why fire departments exist. The volunteer bucket brigades of old were capable of extinguishing a blaze, but they lacked the knowledge and equipment to affect a proper search. Today, we know that it takes an aggressive, well-staffed company/department to make the push into a burning dwelling and pull someone from certain death. And when it comes to searching a structure, we must search “vacant” dwellings as well.

In every part of this country, the economy is down, people are losing their homes and homeless numbers are growing. These are the new generations of homelss, men, women and children who are not accustomed to living on the streets. And until the economy stabilizes, and new jobs are generated, they will continue to seek shelter in these “vacant” dwelling all across this county. Just like foreclosure knows no limits, nor do “squatters” living in these “vacant dwellings”. It doesn’t matter if you are in Wilmington, Delaware; Washington, D.C.; Canton, OH; Detroit, MI or Burlington, VT — homeless is homeless and cold is still cold. Should we not search these structures because a neighbor tells us so? Certainly not! Since when do we take a civilian’s word that a structure is unoccupied? That’s not something I ever was taught.

I urge you, when making decisions regarding firefighting in vacant structures; do not take any extraordinary risks, but do complete the basics of fire attack. Structural firefighting by definition, is a risk and is ranked as one of the most dangerous jobs in the country. So if you are not prepared to take the necessary risks that come with the service; Wal-Mart and the American Legion are always looking for new help.

Everything is political. Except the work.